Race for the White House: The Home Stretch

“Our election process this year, from start to finish, will be unlike any in recent memory,” says Washington Policy Analyst Ed Mills.

To read the full article, see the Investment Strategy Quarterly publication linked below.

We often receive questions about the impact of elections on the stock market. In reviewing the historical analysis, we have seen periods where election outcomes have caused short-term volatility, but more importantly, we see that this volatility generally quickly corrects itself. We track what is going on in Washington because it can have extremely important market implications, from both a macro and sector-specific outcome, but above all, we always remind investors to not overreact to near-term swings in the market created by Washington activity.

We view the following outcomes as the most likely composition of government post-election: 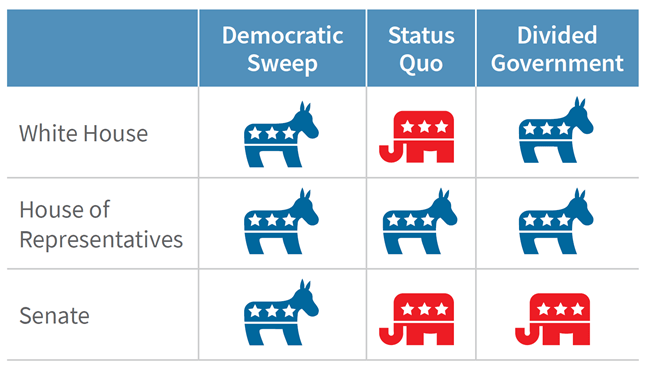 As we think about the potential impact on the markets, we believe it is extremely important to avoid overly broad or sweeping conclu­sions and have a discussion of what might be different this year versus previous elections. Any discussion of the election has to rec­ognize how important D.C. has been to the markets since the outbreak of COVID-19. We are in the middle of the largest fiscal and monetary experiment in the history of the world. The economic recovery and market reaction will be tied to the health aspects of the pandemic, and also to how much additional support is pro­vided by Congress (fiscal) and the Federal Reserve (monetary). Finally, we will be paying close attention to the makeup of Congress, as the ability to enact a legislative agenda is correlated to who holds a majority in the House and Senate.

As 2020 has proven to be an extremely unusual year, we see some potential curveball scenarios that are worth keeping an eye on as we get closer to Election Day. These include:

The battle for the Senate

Policy in the next presidential term will run through the Senate. As such, markets will be closely watching the outcome of key Senate races for their potential to swing party control of the Senate to Democrats for the first time since 2014. 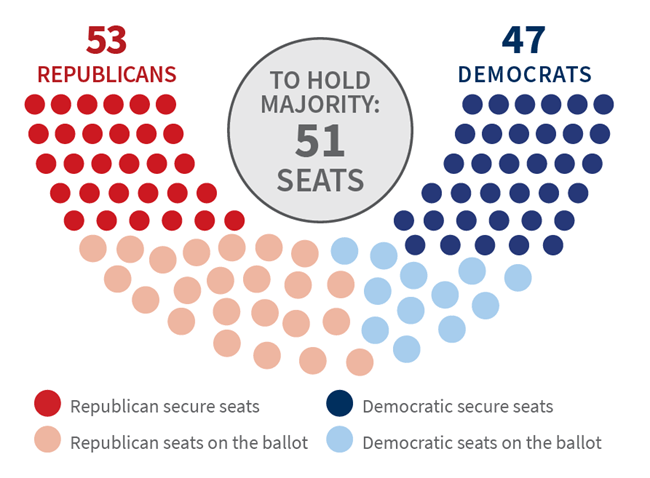 In a Democratic sweep, we will be debating the market impact of the anticipated additional fiscal support for the economy vs. the increased probability of tax changes. Discussion on the potential elimination of the filibuster (lowering the threshold from 60 votes to a simple majority to pass legislation) would have a significant impact on what type of legisla­tive agenda could occur in a Democratic sweep. Confirmations of key cabinet positions, judges, and regulatory agencies will also be closely examined to determine the direction of policymaking.

Race-by-race analysis and polling data favor Democrats to retain the majority in the House of Representatives. Democrats built a sizable majority in the 2018 midterm elections, and current political trends support a continuation of the dynamics that boosted Democrats in the midterms. Democrats are currently favored by a notable margin in the “generic ballot” test, traditionally the best indicator for the overall House result. An approximate seven point lead in the generic ballot produced a 40 seat Democratic gain in 2018, and Democrats are favored by a similar margin in this cycle. In order for Republicans to win back the majority, they would have to win all 28 toss-up seats and gain three upset victories in Democrat-favored seats – a significant uphill battle.

We expect volatility around the election to continue the historical trend of a cautious market approach leading up to November. The nature of our election process this year, from start to finish, will be unlike any in recent memory. Razor-thin margin swings could produce widely divergent outcomes, while vote count delays could stretch Election Night into Election Weeks or Months. Historically, this volatility quickly corrects itself as the result settles. A presidential race in an uncertain and unpredictable year is proving to be no exception to the trend, but as we frequently say about D.C. market impacts, the ultimate outcome is never as good as you hope nor as bad as you fear.

All expressions of opinion reflect the judgment of the author and are subject to change.

Discover what your business is meant to be

Raymond James financial advisors may only conduct business with residents of the states and/or jurisdictions for which they are properly registered. Therefore, a response to a request for information may be delayed. Please note that not all of the investments and services mentioned are available in every state. Investors outside of the United States are subject to securities and tax regulations within their applicable jurisdictions that are not addressed on this site. Contact our office for information and availability.